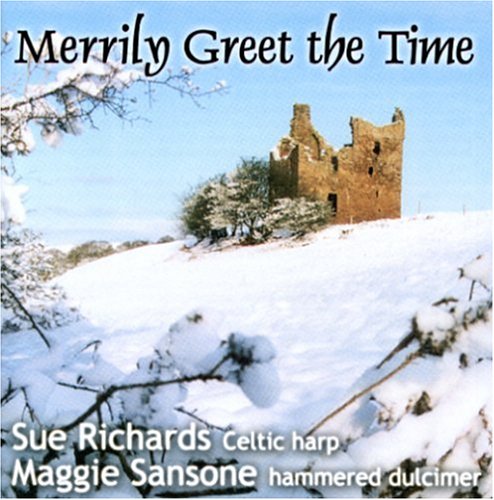 Seasonal music from the Autumn Equinox to the New Year! This album celebrates music from Great Britain and other lands where Celtic people settled. From harvest time to the old Celtic new year called ''Samhain'' (now called Halloween), into the time of the Winter Solstice and the longest nights, and onto the coming promised light of Christmas and the New Year - throughout this time, our ancestors braced for the coming cold with the warmth that a winter's hearth (and a good pint) could bring.

Maggie's Music is a broad ranging musical tour of the wellsprings of Celtic music...comprehensive and beautiful. -- SCHWANN CATALOG

One of the best musicians on the Celtic harp from either side of the Atlantic. -- COLUMBIA FLIER

There's something about the sound of the hammered dulcimer that goes perfectly with the mood of Christmas! -- CD Review

SUE RICHARDS, Celtic harp. The evocative power of the Celtic harp has no greater genius than Sue, called "one of Americas brightest stars" (Dirty Linen folk amp; world music magazine). A four-time National Scottish harp champion, teacher and adjudicator in harp competitions nationwide, Sue also tours with Ceoltoiri and Ensemble Galilei. Sues recordings include: Grey Eyed Morn, Morning Aire, Hazel Grove; with Ceoltoiri: Silver Apples of the Moon, Celtic Lace, Women of Ireland; and with Ensemble Galilei: A Winters Night, Music in the Great Hall, and Ancient Noels. MAGGIE SANSONE, hammered dulcimer. One of Americas finest hammered dulcimer performers, Maggie brings a unique vision to the music of the ancient Celts. Featured on CBS-TV "Sunday Morning, NPRs "All Things Considered," and "The Thistle amp; Shamrock". Her recordings include: Celtic Meditations, A Travelers Dream, Dance Upon the Shore, Mist amp; Stone, Traditions, Sounds of the Season, Sounds of the Season II, Ancient Noels and A Scottish Christmas. Maggie is founder and CEO of Maggies Music, which distributes over 50 recordings worldwide featuring some of the finest musicians performing today including Bonnie Rideout, City of Washington Pipe Band, Hesperus, Al Petteway, Ceoltoiri, and Ensemble Galilei. CONNIE MCKENNA, vocals. Irish-American singer Connie sings in the traditional old style" called Sean Nós. She studied Irish Gaelic at University College, Galway in Ireland and Irish singing at the Willie Clancy School in County Clare, Ireland. A WAMMIE winner for Best Traditional Irish female Vocalist from the Washington Area Music Association, she is lead singer in the band, Ceoltoiri. Connies recordings are: Silver Apples of the Moon, Celtic Lace and Women of Ireland. KAREN ASHBROOK, Irish flute, whistle, hammered dulcimer. Karen is known for her delicate touch, trademark shimmering lilt and ear for authentic Irish ornamentation. Irish reviewer John ORegan calls her recordings "Celtic music for the mind and body." Karens recordings include Celtic Café (with Paul Oorts), Hills of Erin, Knock on the Door and recordings with her band Ceoltoiri (see above). RALPH GORDON, cello. Ralph performs and teaches in the Washington D.C. area and is a much sought after freelance musician, who appears on over 80 recordings. His classical training at Manhattan School of Music provides a technical basis for his playing in many genres of music including the Celtic music heard on this recording.

What’s Left of Communism in China?

Capitalists, once detested, are now welcomed into the Chinese Communist Party.

Because of their association with the United States, many members of disability-rights organizations in Afghanistan are at risk.

The beginning of the end of roe

Will the Biden Administration Get Bolder on Improving Abortion Access?

The FDA’s announcement that it will permit abortion medication to be sent by mail is a start—but advocates are hoping for more.

“Roe v. Wade” Will Functionally Cease to Exist in Texas

Unless the Supreme Court steps in, the country’s most dangerous anti-abortion law will go into effect, banning abortions after six weeks and placing a cash bounty on providers.

If “Roe v. Wade” Is Overturned, the Future Will Be Worse Than the Past

When abortion was illegal, there was no organized, aggressive antiabortion movement with a wing of violent fanatics.

Go Ahead, Worry! A Worst-Case Scenario for American Democracy

The American far right has transformed politics in unprecedented ways. Can this be reversed?

The Battle of Blair Mountain saw thousands of miners battling cops’ machine guns—and enduring aerial bombardment. Yet today hardly anyone remembers a thing about it.

Despite passing a landmark bill banning new contracts with the agency, there’s still a long way to go to truly abolish it at the state level.

Can “Lottocracy” Save Democracy From Itself?

The Costs of 20 Years of War

For Haitian Prime Minister Ariel Henry, the weekend’s earthquake is virtually a gift from God.

“Hear Our Cries”: What Terrifies an Afghan Women’s Rights Activist

K, an anonymous advocate for Afghan women, speaks out while hiding from the Taliban in Kabul.

The Middle East Is Draining Its Water Supply

Drought and government action threaten the dozens of civilizations that have been nourished by these waters for millennia.

America Can Afford Biden’s Investments at Home. Look at How Much It Spent on Wars.

Barbara Lee Has to Vote

What Can Democrats Do to Fight Texas’s Abortion Ban? Lots.

Why Are We Minimizing the Story of the Would-Be Capitol Bomber?

The Rhetoric of Pop Psychology

How Capitalism Has Made the World Sick

In his new eight-hour epic, the British filmmaker offers a globe-trotting chronicle of our times.

Can one tell the story of a country through one family?

The Appeal of Ordinary Millennial Experience

Rainesford Stauffer proposes a different way to understand a generation defined by precarity and overwork.

Plus Eric Foner on Black politics and history.

Listen: High School Football in the Shadow of the Nation’s Capital

View: Mexico Could Soon Become the Largest Legal Marijuana Market in the World

But activists say the law fails to address the widespread pain that decades of militarized enforcement have caused.